Frank Bowling has been hailed as one of the finest British artists of his generation. Born in British Guiana in 1934, Bowling arrived in London in 1953, graduating from the Royal College of Art with the silver medal for painting in 1962. By the early 1960s, he was recognised as an original force in London’s art scene with a style combining figurative, symbolic and abstract elements.

After moving to New York in 1966, Bowling’s commitment to modernism meant he was increasingly focused on material, process and colour, so that by 1971 he had abandoned the use of figurative imagery. Bowling’s iconic ‘Map Paintings’ (1967-71), which include the stencilled landmasses of South America, Africa and Australia, embody his transition from figuration to pure abstraction. As a contributing editor at Arts Magazine (1969-1972), Bowling rejected the idea that ‘artists who happen to be black’ should be making overtly political or protest art and defended those engaged in abstraction. His critical writings represent a significant contribution to intellectual debates on ‘black art’. In 1969, Bowling organised, curated, and wrote the catalogue essay for the notable exhibition, 5+1, at the State University of New York, Stony Brook, and Princeton University, which showcased the work of five African American abstract artists as well as his own recent paintings. Bowling exhibited six large ‘Map Paintings’ in a solo show at the Whitney Museum of American Art in 1971. From 1973 to 1978, Bowling experimented with ideas of chance and ‘controlled accidents’, pouring paint from a two-metre height to create his visually arresting ‘Poured Paintings’.

Bowling returned to London in 1975 but continued to spend significant periods in New York. His sculptural paintings of the 1980s include embedded objects and thickly textured canvases, and have been described as evoking landscape, riverbeds and geologic strata. Visible in his work, are legacies of both the English landscape tradition and American abstraction. Bowling shares Turner and Constable’s preoccupation with light, never more evident than in his dazzling ‘Great Thames’ paintings of the late 1980s. Bowling’s experiments with ammonia, gel, metallic and pearlescent paint create incandescent reactions on the canvas. His recent work encompasses collage, poured paint, stencilling, staining, and stitching canvases, bringing together techniques honed over a lifetime of painting.

Bowling became a Royal Academician in 2005 and was awarded the OBE for services to Art in 2008 and a knighthood in the Queen's Birthday Honours in 2020. His work is represented in fifty collections worldwide and has been exhibited in 160 group and 100 solo exhibitions, including the 2017-19 touring exhibition, Mappa Mundi, and the hugely successful retrospective at Tate Britain in 2019. Bowling is the subject of a BBC documentary, Frank Bowling's Abstract World, which coincided with the opening of the Tate Retrospective. At the age of 86, Bowling works every day in his South London studio, accompanied by his wife, Rachel, other family members and friends, forever driven by his fascination with pushing the vast and radiant possibilities of paint. 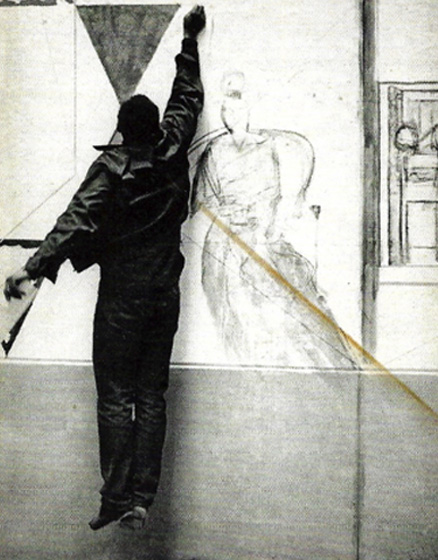